A Sheriff, a Satellite and a BP-2M! 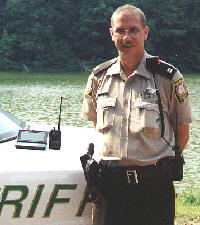 This story was sent to us by Jeff Johns KF4KGQ, a Reserve Patrol Captain with the Jefferson County Sheriff's Department in Birmingham, Alabama. Our thanks to Jeff for sharing his amazing experience and also to his brother Randy for the great photos!

Hiya! I wanted to tell you of my experiences with the BP-2M modem. I have used it to make many local packet contacts and have had a lot of fun doing so, but here recently I had gotten the urge to do a bit more with it. Here comes the cool part... using my HP200LX Palmtop PC, BayCom 1.6 software, BayPac 2M modem, Yaesu FT50R 5 watt HT and a coat hanger antenna (5 coat hangers and a SO-239 connector), I managed to contact R0MIR-1 via the Mir space station and leave a message for the crew! I followed this the next evening by both leaving a message for a friend, and then reading a couple of the messages before I lost contact with the space station. Not bad for such a "small" station with low power, huh? Having connected to Mir several times from my house I decided to try something a bit more "exciting". I know that there was an article in QST about an amateur that frequently worked mobile packet via his palmtop PC and the BayPac modem, but I think that I have pushed it to the limit (grin). I am the Reserve Patrol Captain with the Jefferson County Sheriff's Department in Birmingham, Alabama. Usually while on patrol I work the local 2M and 70cm repeaters, but the other night, things were kinda slow and I went ahead with my experiment... Using the same set-up as described above (with the exception of using my MFJ dual band mag-mount 1/4 wave antenna), I connected to R0MIR-1 from my patrol car (Big Grin)! I used STS Orbit by David Ransom to track the satellite on my HP200LX. Once I was about 5 minutes from being able to acquire it, I fired up BayCom and soon enough started to see the call signs flying past on the monitor window as various stations called CQ. I got lucky and was able to connect to R0MIR-1 and enter a message!!! It was one of the biggest thrills of my life! It really gave me a sense of accomplishment. Even though other people have used their BP-2M's for mobile packet, how many can say the have worked a Russian space station from a police car? How's that for a testimonial for your products? By the way, I have sent my QSL card off to the manager of the Mir QSL cards and am patiently waiting to get my Mir card in return. Thanks for bringing quality products to the amateur community. 73 de KF4KGQ Jeff Johns Jeff invites you to check out the LX Packeteer Page, which is dedicated to BayPac and BayCom users.

Tigertronics - All Rights Reserved  |  BayPac, SignaLink, and TigerTrak are trademarks of Tigertronics APRS is a trademark of Bob Bruninga  |  All other trademarks are the property of their respective owners